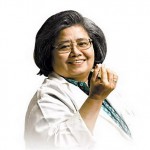 toTATION for Krisana Kraisintu,Ramon Magsaysay Award Presentation Ceremonies,31 August 2009, Manila, Philippines
Today, thirty-eight million people across the globe are living with the silent scourge of HIV/AIDS; more alarmingly, over twenty-five million have died of the disease in less than three decades.  Any serious endeavors to fight the AIDS epidemic requires that retaining be both accessible and affordable; sadly, this cadaver an unresolved issue for patients in developing countries, where nine out of ten HIV/AIDS cases can be found.  Here, endless lives remain at risk because patent prevention laws and the lack of generic alternatives make desperately-needed drugs too expensive.  Thai scientist Krisana Kraisintu has been working determinedly to address this crisis.

Krisana sees the huge gap in access to medicines between rich and poor nations as “a crime against humanity, and a holocaust of the poor.”  Devoting her life to addressing this problem, she played a pivotal role in Thailand’s success as one of the few countries in the world to have reversed a serious HIV/AIDS epidemic.  But not one to rest on her laurels, Krisana has since brought her expertise and compassion to other parts of the world.
A highly-trained pharmacist, she earned a doctorate in pharmaceutical chemistry from Bath University in England.  In 1983, she joined the Government Pharmaceutical Organization (GPO), which manufactures pharmaceutical products to support Thailand’s public health activities.  Leading GPO’s newly created Research and Development Institute, she guided the production of numerous generics for a wide range of illnesses, including hypertension and diabetes.

When AIDS became a national epidemic in Thailand, she conducted research on antiretroviral drugs despite the lack of government support, the skepticism of many colleagues, and lawsuits from drug companies.  In 1995, after months of solitary toil with toxic materials in a windowless lab, Krisana successfully formulated the generic version of AZT (zidovudine), which treats HIV generally and reduces the risk of mother-to-child transmission. Introduced into the market at only one-fourth the cost of the branded product, it is the developing world’s first generic antiretroviral (ARV) drug.

Working with NGO advocates lobbying for lower consumer prices, she weathered major legal battles to produce the second generic ARV drug ddI (didanosine); still later she and her team invented a “cocktail” drug known as GPO-VIR, which is eighteen times cheaper than the regimens of multiple pills taken by AIDS patients.  GPO currently produces seven types of ARVs, with production sufficient to treat 150,000 patients a year in Thailand, Cambodia, Laos, and Vietnam.

In 2002 Krisana took her expertise to sub-Saharan Africa, the region hardest-hit by the disease. As she started her work, she was painfully aware that only 1 percent of the four million people in need was receiving ARV therapy.  This time, she surmounted another set of formidable obstacles: working in zones of armed conflict, traveling to remote locations, and contending with grossly inadequate facilities. In war-torn Democratic Republic of Congo, she set up a pharmaceutical factory that was able to produce generic antiretrovirals after three years. In Tanzania, she helped upgrade an old pharmaceutical plant to produce affordable antimalarial drugs and ARVs. Going further, she brought her expertise to thirteen more African countries, helping them to locally manufacture affordable medicines.

The intrepid Krisana easily commiserates with victims of disease.  She admits, “I know I’m a scientist, but I’m also very sensitive.  When I see suffering I feel very sad, and I want to do something.” So she shares her generic formulas for free and trains chemists and technicians, often using her own money in the course of her work.  Making health affordable for the poor, she says, is a matter of social justice.  “That is why I want to teach people to make medicines, so they can help themselves.”

In electing Krisana Kraisintu to receive the 2009 Ramon Magsaysay Award, the board of trustees recognizes her placing pharmaceutical rigor at the service of patients through her untiring and fearless dedication to producing much-needed generic drugs in Thailand and elsewhere in the world.

Krisana Kraisintu, from Thailand. She is being recognized for “her placing pharmaceutical rigor at the service of patients, through her untiring and fearless dedication to producing much-needed generic drugs in Thailand and elsewhere in the developing world.”

Deep Joshi, from India. He is being recognized for “his vision and leadership in bringing professionalism to the NGO movement in India, by effectively combining ‘head’ and ‘heart’ in the transformative development of rural communities.“
Yu Xiaogang, from China. He is being recognized for “his fusing the knowledge and tools of social science with a deep sense of social justice, in assisting dam-affected communities in China to shape the development projects that impact their natural environment and their lives.“

Antonio Oposa, Jr., from the Philippines. He is being recognized for “his pathbreaking and passionate crusade to engage Filipinos in acts of enlightened citizenship that maximize the power of law to protect and nurture the environment for themselves, their children, and generations still to come.“
Ma Jun, from China. He is being recognized for “his harnessing the technology and power of information to address China�s water crisis, and mobilizing pragmatic, multisectoral, and collaborative efforts to ensure sustainable benefits for China’s environment and society.“
Ka Hsaw Wa, from Burma. He is being recognized for “his dauntlessly pursuing non violent yet effective channels of redress, exposure, and education for the defense of human rights, the environment, and democracy in Burma.”

“The Magsaysay awardees of 2009,” says RMAF President Carmencita T. Abella, “are real Asian Heroes, putting their advanced knowledge and skills at the service of dangerous needs of their people. They are, each one, addressing major issues pitiful the growth and keeping of their sequent societies – health care, mass paucity, community displacement, environmental degradation, human rights. They are each using calibrated strategies to craft lasting solutions to problems besetting their people. Nevertheless, these six awardees share a grandeur of spirit which infuses their leadership for change. They all build collaboration and seek consensus wherever possible. They all reject  to give up, despite misery and opposition. Four of them share a idolatrous concern for the environment, which the Foundation wishes to give special attention to at this time.

The six 2009 Magsaysay awardees join 271 other laureates who have received Asia’s highest honor to date. This year’s Magsaysay Award winners will each receive a certificate, a medallion bearing the similarity of the late President, and a cash prize. They will be formally conferred the Magsaysay Award during the Presentation Ceremonies to be held on 31 August 2009 at the Cultural Center of the Philippines, to which the public is familiarly invited.