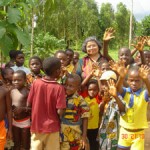 Mama Tough of Africa or The  gypsy  pharmacist

for action medeor, a German Aid organization which is a non-profit organization dealing with local production and diffusion of medicines in Africa.

Pharmaceutical work experience in Thailand
From 1992 to 2002, Dr. Kraisintu worked on the formulation development and bioequivalence studies of HIV/AIDS -related drugs.   Her unwavering conviction of AIDS as a social issue and her consecration to increase access to HIV/AIDS cure in Thailand resulted in the successful research and generic manufacturing of Zidovudine (AZT) in 1992. Her achievement raised the pharmaceutical and health profile of Thailand as the first developing country to manufacture generic HIV/AIDS drugs. In 2001 Dr. Kraisintu developed one of the first generic ARV fixed-dose combinations, which has been chosen by WHO as the first regimen treatment for HIV/AIDS patients in poor countries.   In Thailand, this drug (GPO-VIR) is used in the national HIV/AIDS treatment programme, making it free of charge for 150,000 patients.  It is made available due to the fact that Dr. Kraisintu’s formulation drastically reduces the prices of the finished products from the original prices. Dr. Kraisintu further developed 5 other types of antiretroviral drugs for the patients.  Her invention has enabled GPO to export antiretroviral drugs to neighbouring countries of Thailand such as Burma, Lao, Cambaodia and Vietnam where poor patients are in great need of high quality and affordable drugs.

During her tenure as Director of Research and Development Institute of GPO (from 1987 to 2002), Dr. Kraisintu developed 64 herbal based- medicinal products ranging from medicines to supplementary food and cosmetics in addition to various medicines for the treatment of diabetes, high blood pressure, high level of cholesterol and specific drugs for children.  As a consequence, Thai patients are able to afford high quality medicines and enjoy a long and healthy life.

Dr. Kraisintu continues her humanitarian mission in healthcare in different regions of Thailand especially in the three Southern provinces of Thailand, namely Yala, Pattani and Narathiwas where underdevelopment, alienation and insecurity prevail.  She trains the women in the communities on post-harvest technology of medicinal plants in order to improve their families’ health wellbeing and to earn additional income by sending their raw materials for drug production at the factory of Rangsit University.

Pharmaceutical work experience in Africa and China
Since 2002, Dr. Kraisintu has dedicated her time, energy and efforts for humanitarian purpose of assisting poor African countries to establish local pharmaceutical production.  Her goal is two-fold; first utilizing her expertise and experience in guiding these countries to build high standard pharmaceutical factories and second to transfer the technology in the production and quality control of essential medicines such as antimalarial and antiretroviral drugs on an industrial scale to local health and pharmaceutical personnel.   The ultimate result is self-reliance and sustainable access to life-saving medicines for the patients.
From 2002 to 2005 Dr. Kraisintu provided technical assistance and know-how to Pharmakina in Bukavu, Democratic Republic of Congo (DRC) in the setting up of an ARV plant and the manufacturing of ARV fixed-dose combination known as AFRI-VIR.  At the same time, she was responsible for the construction of an ARV plant and an antimalarial drug unit at Tanzania Pharmaceutical Industry (TPI) in Arusha.  Subsequently, TPI was able to manufacture artemisinin-based anti-malarial drugs for both adults and paediatric patients in 2003 and ARV fixed-dose combination known as TT-VIR in October 2005.
Dr. Kraisintu continues to be active in pharmaceutical production of essential drugs in Africa.  From 2006 to 2008, Dr. Kraisintu was invited by the Ministry of Foreign Affairs of Thailand to spearhead the humanitarian projects on the transfer of technology in the local production of antimalarial and antiretroviral drugs in West African countries, namely Senegal, Gambia, Burkina Faso, Mali and Gabon and in East African countries, namely Tanzania, Ethiopia and Uganda, in Burundi and Zambia.  This close collaboration has resulted in the capacity building and competence of the health personnel in the concerned countries, who are now able to manufacture antimalarial drugs for their respective needs.  In particular, the personnel of l’Usine Malienne de Produits Pharmaceutiques (U.M.P.P.), the public factory in Mali has mastered the techniques and undergone intensive training (both production and quality control) to produce co-blistered of artesunate and amodiaquine tablets as well as fixed-dose combination of artesunate and amodiaquine in one single tablet, the first African country to accomplish this spectacular pharmaceutical achievement.

In September 2008 Dr. Kraisintu traveled to Saint Camillus Hospital in Karungu, Kenya in response to the invitation of Father Emilio Balliana, Director of the hospital to train the hospital personnel in the production of artesunate suppositories.
From 2008 to 2009, Dr. Kraisintu initiated 2 projects within the framework of bilateral and technical cooperation between Thailand and Burundi to foster capacity-building and local production of antimalarial drugs in the Republic of Burundi.  Her endeavour has led to the setting up of a pharmaceutical production unit in Bujumbura with capacity of manufacturing artesunate suppositories and artesunate and amodiaquine tablets for both children and adults.
In 2009 Dr. Kraisintu established a specialized unit for research and development of herbal medicines and a manufacturing facility at Harbin Institute of Technology in China.
At present, Dr. Kraisintu is working closely with the Mozambican government in constructing and equipping a pharmaceutical factory in Nacala, Northeast Mozambique.      She has recently completed the training course for two Mozambican pharmacists in the production and quality control of medicines at the Faculty of Pharmacy, Rangsit University.
Under her guidance and pioneer, the Faculty of Pharmacy, Rangsit University and Heilongjiang University of Chinese Medicines in Harbin, China are collaborating on a research project on medicinal plants and its eventual market products for Chinese patients as well as an establishment of Thai-Sino hospital in Bangkok with a specialized medical team of experts in traditional Chinese medicines.

2. “Global Scientific Award 2004” by The Letten Foundation asa recognition of Dr. Kraisintu’s outstanding scientific contribution in the field of HIV/AIDS.

3. Honorary Degree of  Doctor of Science from Mount Holyoke College, USA, May 2005.

5. Honorary Degree of  Doctor of  Pharmacy from Chiengmai University, Thailand in January 2006.

9.The Prime Minister’s Office of Thailand has awardedDr. Kraisintu “an outstanding individual of Thailand in the field of Social Development for the year 2008”.

13.“Ramon Magsaysay Award for 2009 in Public Service” (Asia’s equivalent of the Nobel Prize) in acknowledgment of her placing pharmaceutical rigor at the service of patients, through her determined and fearless devotion to producing much needed-generic drugs in Thailand and elsewhere in the developing world, 31 August 2009.

14. Honorary Degree of Doctor of Pharmacy from Prince of Songkla University, Thailand in September 2009.
15.“Quality Persons 2010 in Science award” from Foundation of The Scientific and Technological Council of Thailand (FSTT), Ministry of Science and Technology, 19 October 2010.
16.“An outstanding lady on the international arena award  2010”  by the Ministry of Social Development and Human Security of Thailand on the occasion of  100th  year of the International Women’s Day (8th March), 27 October 2010.
17. Honorary Degree of Doctor of Science from King Mongkut’s Institute of Technology Ladkrabang, Thailand, 12 November 2010.

Decoration
In December 2009, Dr. Krisana Kraisintu was bestowed the Decoration “The most admirable Order of the Direkgunabhorn”.  It was created by His Majesty King Bhumibol Adulyadej of Thailand on 22 July 1991 to reward the individuals who devote themselves and their actions for the benefits of the country, the religion and the people of Thailand.

Publications
Dr. Kraisintu has written a book on “Quality Assurance and Control of Pharmaceutical Chemistry” as well as more than 100 articles on different themes and aspects of pharmaceutical industry.  They include
-    Infrastructure needs for production and quality control of pharmaceuticals.
-    Status of Medicinal and Aromatic Plants in Cambodia, Laos, Philippines, Thailand and Vietnam.
-    Industrialization of Medicinal and Aromatic Plants.
-    Generic Production of HIV/AIDS – related Drugs in Thailand.
-    Addition Access Towards a Sustainable HIV/AIDS treatment.
-    The Importance of Generic Drugs Applicability of ICHguidelines for artemisinin-based antimalarial production in Africa: Benefits or Barriers. The stories of her life, work and experience have been published and televised in different Thai and foreign media including

- A Theatre play “Cocktail” by Swine Palace and the Louisiana State University (LSU) Performing Arts, on Dr. Kraisintu’s life and her fastness in overcoming all challenges to bring about high quality and affordable locally produced antiretroviral drugs in Thailand and in the Democratic Republic of Congo in April 2007.  The play’s book was published by Silkworm Books in February 2009.   In increase, a Thai play on the book was staged at the National Cultural Theatre of Bangkok in August 2009.
- French TV5 produced a documentary entitled “Labo: La Loi du Profit” about Dr. Kraisintu’s consecration and untiring work in Africa.  It was televised in France, Canada and the Francophone countries in Africa in 2006.
- A German television channel filmed a documentary about Dr. Kraisintu’s work in Tanzania entitled “A right to live” and aired it in Germany and France on “World’s AIDS Day” (1 December 2006).
- To date, Dr. Kraisintu has documented her travel to save millions of life in Africa and her fond memories of the African people in 5 published books in the Thai language entitled “Gypsy Pharmacist” on the Democratic Republic of Congo, Tanzania and West African countries, “Shining Black Star” on Kenya and “Journey of the Golden Heart” respectively.
- A Thai book on the “Legend of Thai Traditional Herbal Medicines”, co-written and edited by Dr. Krisana Kraisintu, 2009.